Double Or Nothing Day Two Blog along and Day 1 of 100 day project !

The year of fours : LET ME EXPLAIN

So do the 2019 standout players: Jake, Juan, Keon, Amed, Jeff, Luis, Todd, Cano, Nido, Zack, Noah, Drew, Matz, Seth and Diaz.
With Lucky 13 manager! And the best pitching staff in baseball!!!! And Jake's number is 48!!!
It was 4 years ago the Met's went to the world series!
48 Players wore the number 4.
Current line up with those that have the number 4 on their jersey.

Last nights score was 7 to 3, which is 4.
Are you seeing my trend? If the number 4 isn't present, it either adds up to four, or subtracts to four.
And with last nights game as well, it was the 3rd win! The Mets are currently
(3-1) which is what? Means they have played 4 games!

I thought it might be fun and perhaps synchronous for others to read some of this “just in case” you, too, have been experiencing this phenomena in your life! When you see numbers over and over. Oh one of the teams player has an average of .444! And I woke up this morning at exactly, you guessed it! 4:44 am! I used to have a thing with double threes. Now it is fours and it is kinda freaking me out a bit. I had just gotten used to seeing 3's everywhere. Now all of the sudden it is fours! I havent done much research on the number four and what it means, so I figured I would research it myself and post it here for today's blog! Four is seen as the first solid number. That much I know. This year looks like a pretty solid team with solid players, even in stature and build. Four is the number representing the body, with three representing the soul. Which is why I am soulful. That was my three's though. I am no longer seeing them as much. Now, I am embodied. 4 – FOUR – Symbolically number 4 represents the cross and quadrant. It points to something strong, Like I was saying, they have a strong team this year! By the looks of it! I don't wan to jinx anything this early in the season. But I can't help but to think on it. Oh and four phases of the Moon!

So, in baseball terms, maybe there are Angels in the outfield this year! The Mets could use a great year!!!! And I am seeing all sorts of signs!!! So on that note LETS GO  METS GO!

And with this, I am smiling just thinking about How it is 844! And I am done with my blog!
~Livvy 0 Not the Liv! 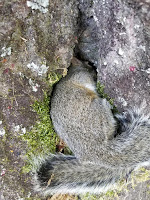 I don't just have squirrel moments, ( this is a 'nutty' post!)

Was Smiling Now and Forever